Last year, I jumped off a plane. It was my first tandem skydiving experience.

Commercial tandem skydiving is easy and hassle-free. We went with an academy in Pattaya run by an Australian boss. We were given a short 10 minute brief on “what you should do if you want to get yourself killed” in a half-jokingly manner. He included “do not puke in mid-air” and “pee before you jump”.

My tandem buddy was an American by the name of John. He looked like he was in his late thirties.

John spoke in a thick west American accent that reminded me of sunny California beach. He also spoke fast and loud – sounded like a carefree cowboy from Texas.

There were 10 of us and the propeller-powered plane could only take two pairs of jumpers at a time; I went last so I had quite a fair bit of time to kill. John and I walked around the hanger to check out a collection of gliders.

“Hey John, what brought you to Thailand?” I knew it was common to have Farang in Pattaya anyway, but the question felt like a safe ice breaker.

“Well, life. Life brought me here. I started sky diving in my twenties and I got hooked. The jumps became part me ever since. I went around the world to dive; and at each place, I hang around a little while. Bangkok is my 20th stop. Or wait, or maybe 23rd. Well, I lost count.”

“Wow! It must be a heck of a life! Do you like Thailand better than any other countries?”, I asked. Now he got my attention.

“Son, this is a wrong question. The world doesn’t make you; you make the world. Thailand is as great as I want it to be, or as miserable as I want it to be too. It is up to you to make a lemon into lemonade…or a cocktail. I prefer it with extra shot though. ”

He tapped his finger lightly on my forehead and said “Start with your head”. He pointed to the dark cloud that was forming not far away and I can vaguely see our plane in the sky.

“See that? What do you see?” Tiny figures dropped out of the plane.

“Storm’s coming and I will probably not make my turn later?” I said.

“Well, yes and no. I see a clear sky for a perfect jump after the storm moves west. Or if the storm does linger on, you just saved your own life. Either way, it is good for you!”

He went on. “Everything has no meaning until we assign them one. You see that?” He pointed to a bright yellow single seated aircraft at the far corner of the hanger.

“It is just an aircraft in our eyes, meaning beautiful mechanics part put together, at best. To him, it is a painful memory. The plane belonged to Mona”. As he spoke, he casually pointed to Alex who was busy getting ready to buddy my friend. Alex is the owner of the academy.

“The world is a void of emptiness. It is how we see it that gives it life.”

He went on, “Every time I hop off the plane, I know there is a slight chance that I will hit the ground like a pancake.” Suddenly, he clapped really hard as if there was a pancake in the air and he just squashed it.

“And I choose to jump every time. Jumping is me. I see every successful landing as another day to live on; and I make good use of the extra hours. God gives you an extra hour, you want to party the hell out of it right?”

We laughed and made our way to get ready for our turn.

“I always look for good amongst the bad. Over prepare for all my jumps, have fun and trust things will turn out the way they should be. What is meant to be is meant to be. This is my way of making the world.  And to your question – Bangkok is a hell of an amazing place!”

He pointed to the dark cloud again. Now, it had drifted farther away from our drop zone.

“Step in here and put your left leg here and your right there” Then he put on the harness zipped me up.

Ouch. A little too tight down there, I thought. But for the sake of not turning into a pancake, I guessed it was worth the inconvenience.

“How do you decide the way you choose to make your world?”, I asked. He signaled me to turnaround to double-check the fasteners on my back.

“Look for defining moments. Moments in life that make and break you into who you really are. These moments are very naked and very revealing”, He stressed on the word “very” by waving his hand.

Pointing to Alex, he said, “For him, it was when Mona died and not saying goodbye; for me, this. ” He rolled up his right sleeve and revealed a tattoo. I looked closely and saw a big scar underneath.

“5 months in hospital. And the naked truth this defining moment revealed to me was that there are very few things that really matter to you in life. Many things that I thought that were important just went Poofff! And became rubbish at your deathbed. Since then, I let go.” The dark cloud has gone away now and it was my turn finally.

“I let go of the habit of sighting faults and flaws in things. I let go of negative people, and I let go of what the world wants of me. Now, get ready!” we got onto a truck that ferried us to the drop zone.

The climb to 12 thousand feet above ground was a little bumpy. I looked out the window and saw that the buildings zooming out of my sight and became so tiny and disappeared.

John opened the door after the pilot stabilized the plane above the cloud. The cloud was colder than I imagined. This is it, I thought. I took a deep breath.

John strapped himself to my back. We sat at the edge of the door and I stuck my feet out into the air. I got a split second of panic attack when my feet felt nothing but streams of freezing air. I felt absolutely naked.

He gently pulled my forehead backward to arc my body into a reversed C shape. It was a softer way to lose balance and drop off the plane.

“Let’s have some pancake!!” He whispered into my right ear. 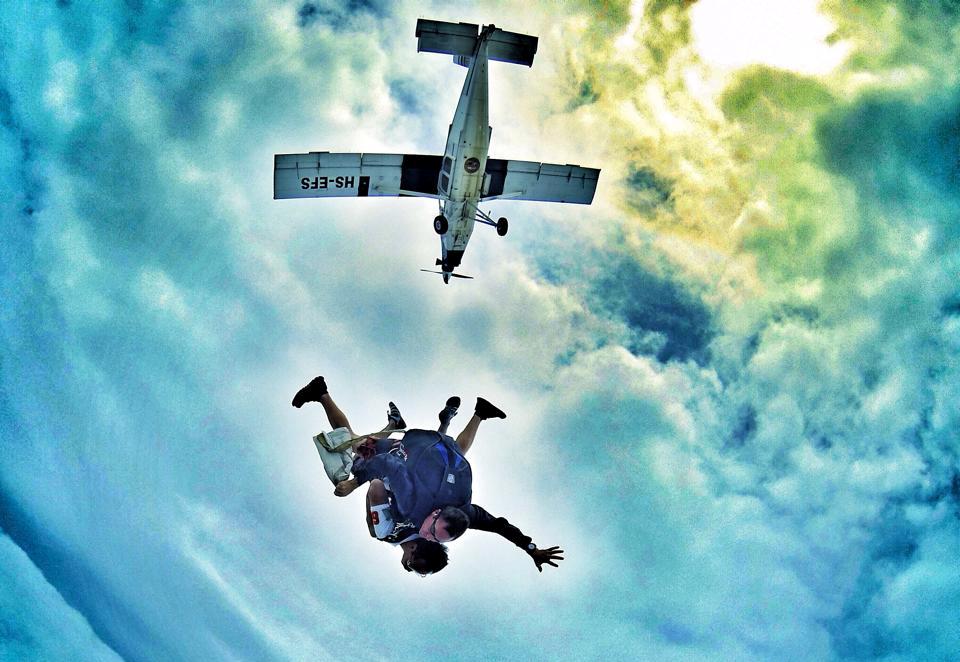 – John and I jumped off the plane –

I tried to take a deep breath but I only managed half of my inhale. Then, I fell.

The moment was surreal. The view was breathtaking. I saw stretches of green meet the sea with a stroke of bare brown land between them. “That must be the beach”, I thought.

The world from the bird’s eye view looked so different. Oh Boy! Free falling with wind gushing onto my face and into my mouth was surreal. It felt like time had stopped.

“Welcome back alive! How did you like the world you saw up there?”, we gave each other a high five and a hug.

“Well, it was definitely a defining moment!” I said.

“A defining moment for you and me.” He mimicked me.

We laughed.  Then, I thought of his tattoo again.

It was a parachute carrying the word “Life”.