I saw a Groupon deal with beautiful copywriting. It said “Relaxing scenic trek in Annapurna with yoga. Relaxes your mind and stuffs like that”. OK, relax and yoga sounded like the right keywords for a getaway. How tough could it be when it involved morning yoga and yogurt?

So I signed up with two buddies, William and Saha. They were marathon runners and I was a walking potato.

2 weeks into booking the trip, an after-thought kicked in.

“I would probably not go back to Nepal anytime soon anyway, so might as well do Everest instead”. So William proposed a “trade up” plan – Let’s go to Everest! Saha said “Sounds like a good idea!” and I screamed “Guys, we agreed on Yoga and Yogurt! Everest doesn’t sound relaxing weii!”

The truth was: the idea was exciting. But, I was never a trekker. In fact, I couldn’t even stay on the treadmill for 20 minutes without getting a heart attack from panting too hard. So, as exciting as it was, the thought was equally daunting. I was scared.

Eventually, I decided to #YOLO it.

I went to Everest Base Camp. I made it.

Here are 6 lessons I learned.

1) If you are doing it for the first time, you will never be ready anyway.
Same goes for every other “first” attempt in life.

Remember when you first learn how to swim? As much as you can memorize the techniques – you would feel insecure until you got into the pool for the first time. Remember your first stage performance? After 200 hours of grilling practices – you would still feel a tornado of butterflies in your tummy. Same goes to heading off to Everest Base Camp for the first time. We trained, over-stocked our medicines, bought expensive waterproof socks, and a pocket knife in case we walked into a bear – we weren’t certain until we did it.

Good news is comfort zone is made of lousy grade C rubber band. Once stretched, it stays permanent. You can never unlearn swimming, how to drive, or how to dance. Your zone stays bigger and richer – what once seems unthinkable will become peanuts – because you now have certainty. By the way, you do not step out of your comfort zone, you expand it. The way to be expanding it is to just do things for the first time.

2) If you are not ready anyway, make sure you get help.
The fastest way to succeed is to get the right help.

I met some hardcore climbers. One believed if you do not carry your own weights – you are a tourist, not a trekker. In short, paying for porter to share the load of our backpacks is a short cut and a true blue trekker doesn’t take short cuts. Another one said he never hired a guide but only relied on him and his map. A tour guide is a sin.

Having traveled to Everest Base Camp with an awesome guide and having gone to Gobi Desert with a lousy one – I can tell you this: A good guide makes a tremendous difference. A good tour guide is a teacher; he educates and opens up your heart and mind. 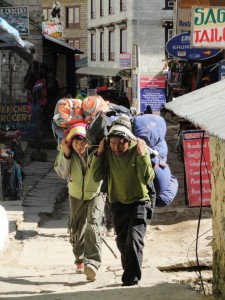 We had a great guide with not one but two porters. We would never make it to the top without them. Furthermore, they made amazing travel buddies. Our young and lively porters like to race with us. They would start the morning by saying “you guys go ahead, we will catch up” and next thing you know, they appear ahead of us with a cigarette between their lips, looking relaxed while we were panting like a buffalo performing circus tricks.

“If I have seen further it is by standing on the shoulders of giants” – Isaac Newton.

Remember, you don’t have to be Batman all the time. Get help.

He said: “this journey to Everest Base Camp is your journey; not mine; nor everyone else’s. It is not a race. So, take your time”.

A round trip from Lukla to Everest Base Camp was about 130 KM and it took around 9 days to walk in and another 3 days to walk out. Come to think about it – it was not too unimaginable a distance. But when I was IN the journey – I thought I was walking to Argentina instead.

Along the way, we were overtaken by many. We said “Hi, go ahead. Enjoy your journey.”

Prem Dai also said, “sometimes, you can go fast but sadly you won’t reach your destination.” 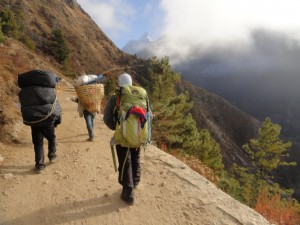 There were times when uphills got frustrating. So, William taught me a trick.

Keep my head slightly low and focus on the next 10m distance. Then, just take one step at a time. I trekked behind Prem Dai and I stared at his shoes. Where and when he stepped, I followed. I chanted “just one more step”. One step after another, I conned myself to keep walking.

This is the power of many small steps. Brian Tracy calls it the law of accumulation. By the yard, it’s hard. But inch by inch, anything’s a cinch!

There is only one rule here: Keep going.

4) By the way, try not to buy the wrong insurance
If you are injured, the fastest way out is via air transport. On average, we counted around 10 rescue helicopters every day. On a bad day, it went up to more than 15 before lunch.

Guess how much each trip costs? 3 grand without an insurance coverage!

Now, I am going to tell you a secret now. I bought the wrong insurance. The one I bought didn’t cover air rescue. Yes, *touch wood* If I ever needed air rescue it would be my credit card paying the bill.

What do you do when you are in the middle of trekking and realize that you do not have the right insurance? Find ways to stay alive. I became more mindful of my steps, my diet, and my surrounding. I can’t afford an injury! 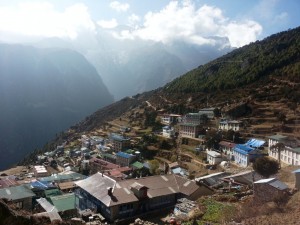 Removing fall- back plans drives focus. You have no way to go but forward. So, you have to put forth double of your best effort. Remember those time when you were so close to a deadline (assignment, exam etc), somehow you would burn the midnight oil and come up with something. Somehow, things got done.

When was the last time you were desperate for something? Somehow, what happened?

Anyhow, I do not recommend going to Everest Base Camp without insurance. It is quite a foolish. But if you ever do it by coincidence, stay alive.

5) Look for stories
We stayed in a small town in Periche for our second acclimatization. It was a small village with a few guesthouses, an internet café, and a café. The internet café charge was exorbitant, so we decided to spend our day at the café instead. It was one of the best decisions.

I have long forgotten the name of the café owner, but I remember his story. 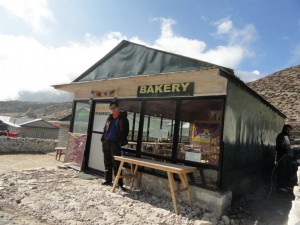 He escaped along with his school buddies, escorted by his teacher. He had nothing except for an identity which was stripped off the moment he stepped out of Tibet. He was 6.

His biggest regret was not saying goodbye to his parents. So when he got a little older, he sneaked back home. He had the few best days of his life at home with his parents; until one night, the Chinese army knocked on his door and took him away.

He was forced into hard labor at the mine for months – tortured and starved. Eventually, he was thrown across the border again and was told to never come back. So he did. Since then, he had not heard from his family again.

He had a dream – to reunite with his family in the Tibet that he used to know.

He learned how to bake, started that café, and got married with kids. His kids were lovely – I spent the afternoon throwing stones with her and there was just so much of bliss and happiness. That evening was my best memory from the trek.

Unfortunately, he was without an identity and so his kids were born refugees too. 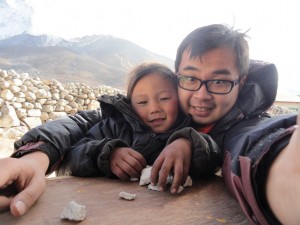 When we bid goodbye, we left him a copy of the biography of Dalai Lama we bought from Namche bazaar and on the last page, we signed “Keep dreaming. Keep living.” His eyes became teary.

The next morning, I left Perinche with a heavy heart and a lighter soul. I whispered a prayer as I turned back and had the last glimpse of the village, “May God bless you”.

6) What is the journey for?
The Base camp was not as scenic as I imagined; I couldn’t find the mysterious high power enlighten monk either. It was a big pile of stone with a banner on it. There were signatures, pictures, and messages. Some of them were rather soul-stirring.

“I did this for you. You have always wanted to be here. You are here now” A father’s message to his daughter in heaven;

“I hope you can hear me better from here. I love you” A boyfriend’s message to his lover in heaven;

“Mum, I miss you…” A helpless scream from a son.

It made me think. Have you ever wondered: Why do we do what we do? Who are we doing it for?

I have learned more along the journey about myself, about the world than what the top could have inspired me.

Like my trek to the top, life is a journey too. 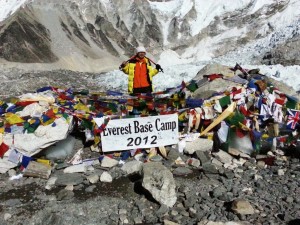 At the end of the journey, at the end of our day, how do we know if we have lived a good life? Somewhere I read, ask yourself these questions.

Many people asked me: “how do you feel when you reached the top?”

So, after William gave his mom and his girlfriend a call; We said: “Let’s go home”. We couldn’t wait to have KFC.

On our way home, Prem Dai said “I know a shortcut. Can we take the faster way? I miss my family already!”. There was no reason to say no. We were not true blue trekkers, after all.

When we bid goodbye, Prem Dai told us what drove him to do what he did. He was a guide for more than 10 years. His dream was to have his own agency one day. He had had that dream for years now.

Today, he did it. I am proud that he shared his dream with me. 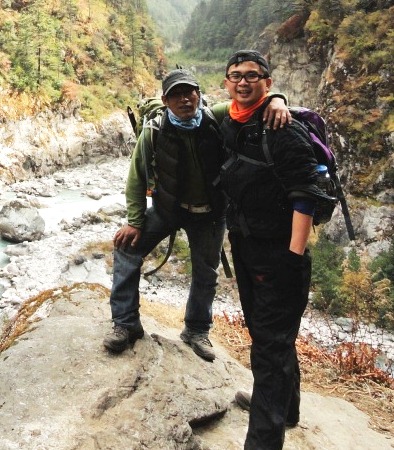 This is a picture of Prem Dai and me at one of the many beautiful valleys.